Self-supporting stairs – about their superiority over concrete stairs

REGARDLESS OF THE DESIGN AND METHOD OF CONSTRUCTION, STAIRS HAVE THE SAME FUNCTION AS AN IMPORTANT PART OF HOME COMMUNICATION.
Wooden and reinforced concrete stairs with wood at first sight look similar, but after examining the details, the differences are seen as on the palm of your hand. Which stairs are cheaper to take and give you more room to arrange? Let's compare the functionality of these two designs.

CONCRETE STAIRS – BOTH MONOLITHIC AND PREFABRICATED – THEY COMBINE IN A PERMANENT MANNER WITH THE CONSTRUCTION OF THE HOUSE.

For this purpose, it is necessary to prepare the reinforcement of walls or ceilings, which are linked in turn to the supporting beams of concrete steps or to the plate of their run. These stairs are very sturdy, but it is extremely difficult for them to add a slightly more sophisticated shape. The construction and quite nature of concrete stairs is also a rather long, time-consuming process. The decisive advantages of concrete stairs are that they can be used from the very beginning. Finishing interiors at different levels of the house is faster and easier. In the case of self-supporting wooden stairs, the professional must use replacement ladders or steps, because the assembly of the selfsupporting steps is one of the final stages of the building of the house.
Alongside the advantages, there are also drawbacks of concrete deforestation which, at a later stage, prevent the correct and esthetic placing of these stairs with wood, without making the necessary adjustments. It is primarily a question of errors in their execution:

poorly designed steps in procedures, which run into a pin, to prevent smooth transition of the
balustrade in this section.
In the event of any of the abovementioned irregularities, "Marchewka" prepares the stair correction projects and templates on the basis of which they are rebuilt. It should also be borne in mind that, contrary to the appearance of concrete stairs, it is much more time-consuming to install. Most of the components of the self-supporting stairway are twisted in the assembly hall, while pre-prepared step pads, footers, plicers are fitted on site, on site. If the wooden parts require recuts, they are made during assembly.

UNLIKE CONCRETE STAIRS, WOOD, SELF-INSTALLATION IS MUCH LIGHTER AND MORE SOPHISTICATED.
They can be given different forms/shapes – especially winding forms – bent so-called "fan-shaped".
Even the highly popular stairs, the modern ZETA (step-substep) also presents itself much more in a self-supporting form.
The fact that stairs are made from start to finish by one company means that there is no room for confusion in these projects. Self-supporting stairs will also be cheaper to deal with wood-laid concrete stairs due to shorter installation and the lack of the need to carry out this concrete discharge.
The choice of the stairway structure shall not be accidental. The end result that we want to achieve should be the main criterion that this rather than another solution determines. If we want to be light, we want to give the stairs a beautiful form with the bent elements and to avoid errors in the concrete spillages of the stairs, let us stand on the self-supporting wooden stairs! 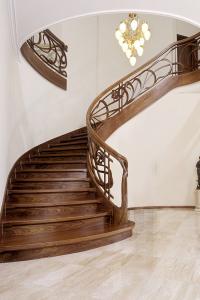